liveˈliv:v; to have a life rich in experience

a life abroad in australia & adventures along the way

We had arranged for a taxi to pick us up from the airport through our hotel, Nguyen Khang Hotel 283/25 Pham Ngu Lao, District 1 where we were greeted by Thu. It was a bit out of the way but the service was wonderful. 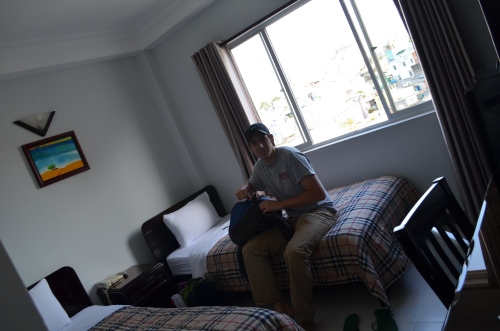 I felt a bit bad when we checked out at 6:30am. Chi was still asleep, but was quick to attend to us. Our taxi also arrived on time to drop us off back to the airport where we headed to Nha Trang. 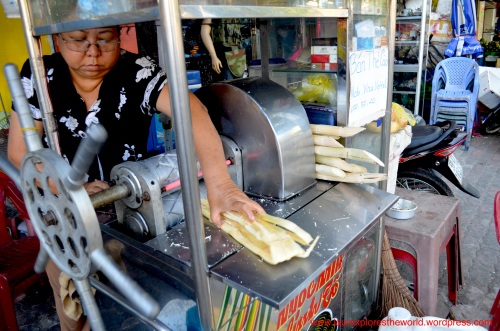 Our time in Saigon was short, where we at at Nha Hang Ngon. Ryan had a beef chili dish and I had Com Tam (Rice and pork). 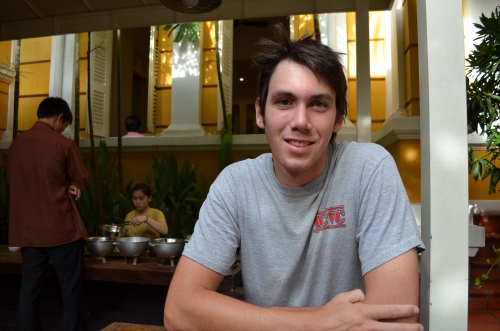 Good stuff. We will be back here towards the end of our trip to experience the Cu Chi Tunnels.

3 Days and 3 Nights in Nha Trang: “Same Same but Different”

I had not arranged with the hotel to pick us up from the airport, so we were greeted by many taxi drivers in the parking lot; yelling at us to pick them to drive us. We just went to the first person that was closest to us. He was a young guy named Phuc, who offered to pick us up from our hotel to take to the airport when we depart Nha Trang. The company was pretty reputable and standard (MaiLinh), and he offered to take us back at a cheaper price. Drop off is 380.000 and pick up is 22o.000 VND. (~$19 & $11).

After checking into Ha Van Hotel (Flamingo Suite’s Ha Van Hotel), we walked around the area. We needed to find the ATM, it took us several tries before finding one that had money in it. While walking we saw a cafe called “Same Same, but Different,” and thought that was an amusing name for the place.  There are many people trying to sell tourists things from sunglasses, hats to motorbike tours. The first man to stop us had a great speech, something along the lines of:

I wish I had recorded this interaction. He was brilliant!  We did not join him this time, but it would be something we’d want to do the next time we visit Vietnam.

We checked out the Sailing Club dive center who is in competition with Rainbow divers…apparently it had been raining the day before, so water conditions were not so great. We decided not to go diving while in Nha Trang. 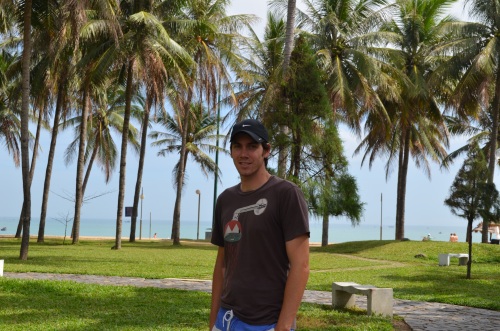 The beach looked really nice, and you won’t see any locals swimming in them. While riding the taxi to our hotel, Phuc warned us not to go swimming in the ocean, due to the high tides. He said it is very dangerous unless you are a very strong swimmer. Regardless of his words of caution, I still intend to swim (Vietnamese people tend to be really fearful of swimming in the ocean for some reason).

For lunch, we ate at the restaurant that was next door to Ha Van Hotel. We had spring rolls, Com Tam Thit Nuong, Rau Muong Xo Toi, & Banh Chan with Nem Nuong along with Pinapple Juice and Bia Saigon. 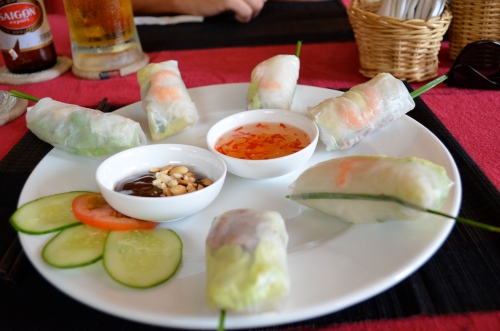 My most unpleasant experience was at Long Son Pagoda. We were bombarded with people trying to guide us or have us buy something…I should not have been bothered by it, but honestly I just wanted to enjoy the Pagoda in peace. If I had wanted assistance, I would request for it, but I don’t want to be followed and be asked personal questions by so many people. They were nice enough, but I had to say no thank you and walk away. As a result I just rushed through the place without really taking it in. Thank goodness I would later go back to here the following day with my cousin aunt and uncle. 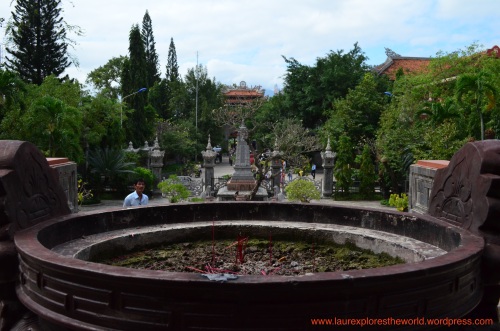 We spent most of the day at Thap Ba Hot Springs, where we enjoyed a mudbath, and the hot mineral water pool. It was 100.000VND to book the shuttle for the both of us (pick up and drop off), and 100.000 VND each for entry. (You’ll have to google for images, because we did not bring our camera with us)

This day turned out to be Relaxation day, because after returning from Thap Ba Hot Springs, we went to SuSpa to get a Vietnamese Massage. During the session they would get suction cups and heat it up with flaming fire, then rub it along your pressure points. I ended up getting the red marks, bruises. That usually happens when your immune system is weak. It felt so good!

For dinner, we ate at Lac Canh VN BBQ. Ryan ordered BBQ beef I believe, and I enjoyed steamed crabs (there were four of them!) with my salt pepper and lime dip YUM! The pictures were taken with my other camera, a canon powershot, which I let my cousin borrow for her remaining trip (she had forgotten to pack one with her, and we had our Nikon SLR, so it was all gravy).

Tuesday 17th January: The most memorable day in Nha Trang

Ryan and I met up with my cousin Victoria, and my aunt and uncle (my mom’s older brother). Their hotel was just a ten minute walk away from ours. They had hired drivers to take a group of us around Nha Trang, there were two carts: Aunt and Uncle with friends in the first cart, followed by the cart Vic Ryan and I and two adult friends.

While on the road, the cart in front of us made a U-turn, to stop at Nha Trang Cathedral. My uncle showed me Uncle Lam’s tombstone. Cau Lam was the oldest brother in the family who had died during the war. I think he was originally buried in the cemetery that had existed next to the church until 1988, when the city needed space for the railway. So that is why there is a wall alongside the cathedral full of tombstones. It was really nice having my uncle Charlie (Cau Son) telling me stories of his childhood and the families history. 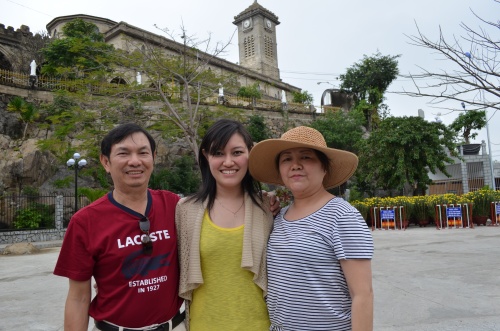 The following stop was Long Son Pagoda. I enjoyed it a lot more with their company. My aunt was very generous with the money seekers. She bought me a fan from one of the many sellers. 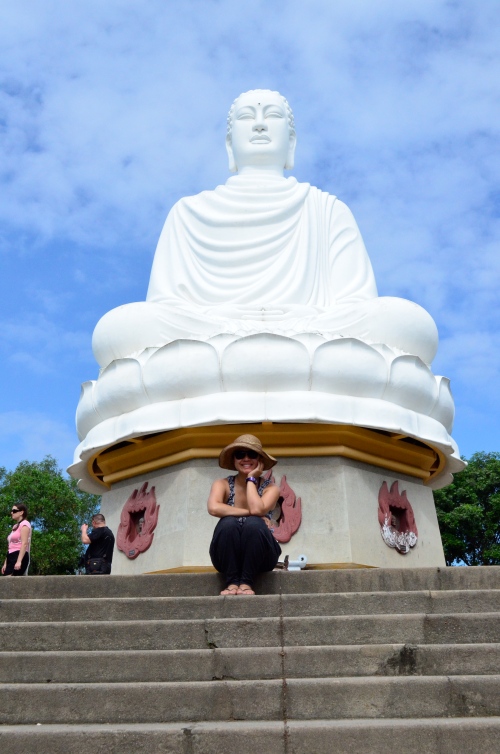 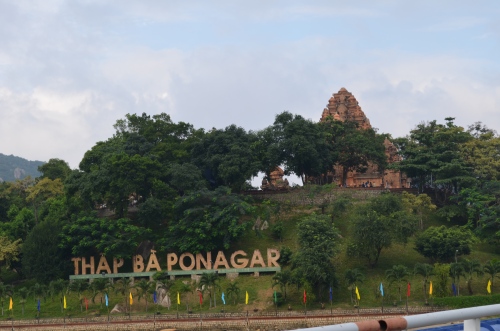 Afterwards, we made our way to Po Nagar Cham Towers. According to Lonely Planet, they were built between 7th and 12th centuries. It was pretty, but we didn’t spend too much time there.

We all then headed over to Cho Dam Markets, where the adults did some shopping. My aunt and uncle got me and Ryan Couri shells that had Nha Trang engraved into it.

Vicky, Ryan and I hung out while the adults took their afternoon nap. We took a cab to Bai Dai Beach (Long Beach) that was 40km from Nha Trang (towards the airport). 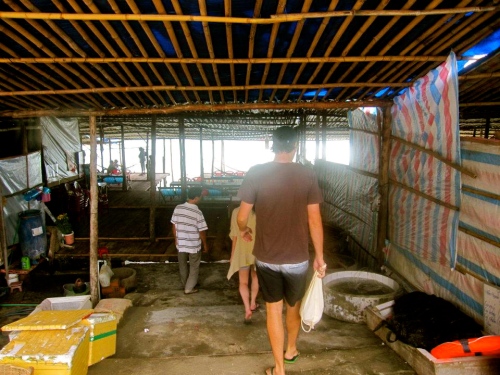 The three of us consumed 7 kilos of seafood that was less than 50USD! It was located right on the beach where waves washed in from underneath us and the wooden floor boards. 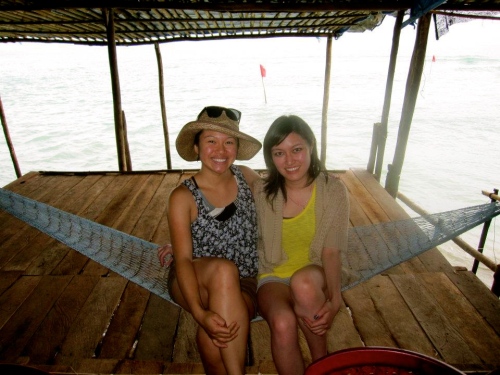 When our hands were getting to juicy from breaking off the shells of crab and clam, we would walk down the steps and kneel over to wash our hands with the incoming tide. When we were finished, we walked down a little further for a swim.

The beach was empty. It was just the three of us enjoying what felt like our very own private beach. The water was perfect and the scenery was phenomenal. You can see the fog on the mountain tops. We had a lot of fun. By far my favorite moment in Nha Trang, possibly the whole Vietnam trip. (Pictures were taken with the Canon, so will have to wait to post photos). 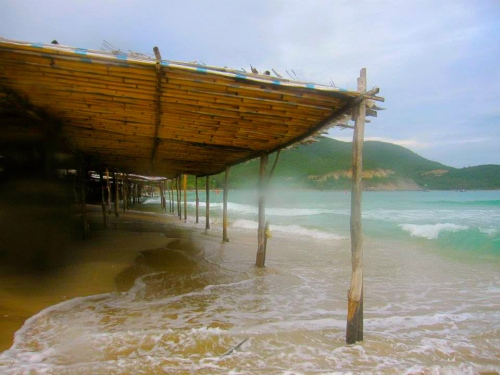 Afterwards we joined my uncle and aunt and her friends for dinner (We love to eat!). Vic Ryan and I had intended to use the pool and steam room at Novotel Hotel, but when we returned, the adults were awake and ready for dinner. So we would wait a little longer for another swim.  Dinner was a feast for the champions with some high quality Cognac being passed around.  My uncle was pretty drunk by the end of dinner, which was funny.  He is usually the silent type, but can be quite the conversationalist.  He gets serious when he’s talking, and makes it sound very important.  You end wanting to listen to him, because that’s the only time you would hear him talk! Nice man. 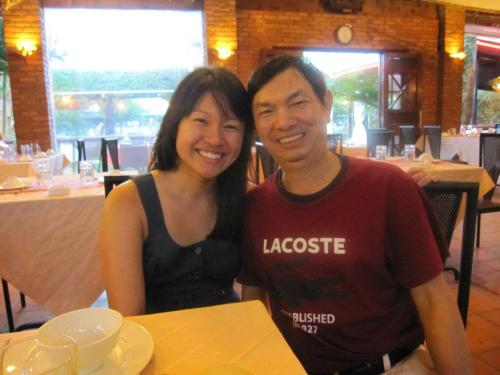 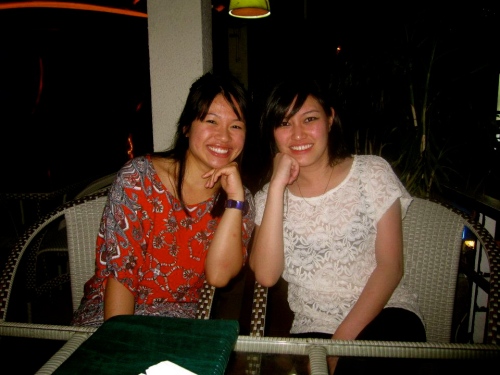 We ended our big day at a bar, with poor service, and walked in the rain on the way back to our hotels. Really happy I was able to meet up with my cousin and her parents in Nha Trang. Looking forward to her visiting Australia in the next upcoming months.