liveˈliv:v; to have a life rich in experience

a life abroad in australia & adventures along the way

Hanoi the day before Tet

Walking around Hanoi during the eve of Tet was quite interesting.

The streets were empty and most shops were closed. It was considerably more quiet than yesterday. Yesterday the streets were busy and crazy. Streets filled with people selling Tet decorations, food, red envelopes, among other things for the festive holiday. Today was a stark contrast.

We were cautioned by Duy to have an early dinner as most places will be closed later in the evening. The streets will be crowded and chaotic with crazy traffic from people travelling to and from places for Tet. He told us to lock up our things in the safe box tonight before we go out and to watch for our pockets. He also reminded us to meet at the Cathedral a quarter til midnight to see all the fireworks; then there will be food back at the hotel.

I feel sympathetic for him having to work during Tet celebrations. He looks so sad. Sweet guy.

Ryan and I made plans to meet up with the people we met on our cruise in Ha Long Bay for dinner this evening at 8pm.

Should be fun. Right now we are relaxing until then, not much to do today, anyway. Wrong time to be around Hanoi, should have planned to be in Central or South Vietnam. On the other hand, it is a nice change to all the loudness of motor bikes and cars zooming by.

That night we met up with a group of English people that we had met along with a couple from Tasmania and had dinner before watching the fireworks, then attending an impromptu party with the hotel staff at our friend’s hotel. 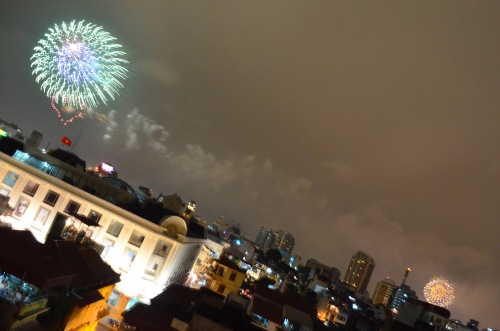 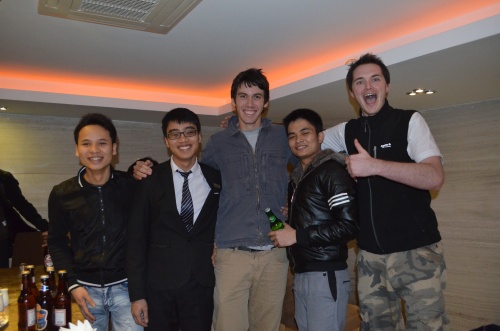 We ended up meeting a lot of people that we ended up meeting up with frequently and having dinner and doing other activities.  I think we made more friends in Vietnam than we have managed to make in the year that we have been in Australia.  I guess it’s just easy to make friends when you’re obviously doing things having a similar mindset.